You are here:
Lighting, Electrical & Security 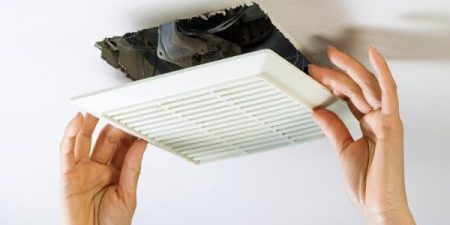 The bathroom fan light is a standard fixture in most bathrooms; however, these fixtures waste a lot of electricity. Among the ways to be more cost conscious about energy use is to install a bathroom fan light that allows you to have separate switches for the fan and the light so that you can turn on only what you need to use.[divide color=”#808080″]

Step 1 -Shut Off the Power

At the switch box, turn off the circuit that controls the power to the existing bathroom light fan.

Remove the cover plate from the existing light switch and unscrew the switch. Pull the switch out of the box.

Remove the lens and light bulb from the light fixture. Loosen the fan assembly from its current location. Doing so may require going through your attic for access since many bathroom light fixtures are ceiling mounted between the joists.

With the fan assembly free, remove the cover plate. Remove the wire connectors and separate the wires. Determine which leads go to the light and which ones go to the fan. Attach a small piece of tape to each set and label them for clarity.

Remove the feed wire from the fan connection box. Tie the new cable for the new fan switch to the existing feed wire. Strip approximately 6-inches of the outer covering from each end of the new wire with the Romex strippers.

At the fan connector box, insert the new cable and tighten the clamp over a section of the cable that still has the outer covering on it. With the wire strippers, remove approximately .75-inches from the ends of the individual wires.

Reconnect the cover plate and replace the fan assembly. Reinstall the light bulb and lens. Loosen all of the terminals on the toggle switch. On the left side of the switch, connect the feed wire from the panel.

Wrap electrical tape around all of the terminals and push the wires back into the box. Screw the switch into place and attach the switch cover plate. Turn the power back on at the switch box and try out your new fan and light switch.

Having the fan and light wired so that they work independently can be an energy saving feature in a home. Before doing any rewiring project, make sure that you have the power turned off for the circuit to insure safety.

How to Install Electrical Boxes
February 6, 2014

How to Install a Floor-warming System
December 30, 2012