How to Install Wire Shelving

Wire shelving provides a quick and easy solution to a cluttered closet. It lacks adjustability but is nevertheless an inexpensive option to help organize your closet. Basic wire shelving is attached to walls with support brackets. For entire wall lengths we recommend ﬁnding a system that also has return wall brackets (often called “side wall brackets”) and support clips. Both drywall shelf clips and stud shelf clips are available at home centers. Support brackets placed at stud locations further stabilize the unit.

A slightly advanced style of wire shelving that is increasing in popularity is track-mounted. It is available in more styles than standard white vinyl-coated wire shelving. This type of wire shelving consists of a horizontal rail track that supports vertical rails, or the vertical may be directly fastened to the wall. Shelf brackets then snap into the verticals and shelves are set on top of the shelf supports. These systems are viable closet organizers but cannot bear as much weight as wood or melamine systems. The span should be kept to 36″ or less and have adequate support—by hitting studs where you can and using toggle bolts every 16″. 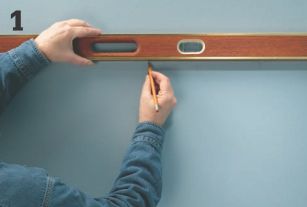 MEASURE WALLS AND MARK FOR SHELVING PLACEMENT
Measure the length of the back wall and the side walls. Measure up from the ground to the desired height for the top shelf and draw a level line on each side wall. Note: The average minimum height above ground is 48″. Mark all stud locations along the back wall and side walls. 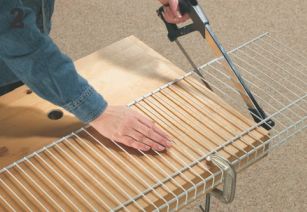 CUT WIRE SHELVING
Cut wire shelving to ﬁ t between walls, using a hacksaw. For shelving lengths greater than 8 ft., cut multiple shelves and connect them with the manufacturer’s connectors (which are often sold at home centers that carry wire shelving). 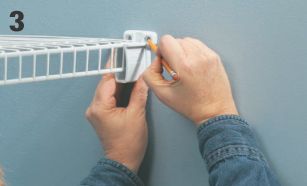 MARK WALL FOR SUPPORT CLIPS
With wire shelving still ﬁt into the side-wall supports, make a mark approximately every 6″ along the wall. Space the marks evenly between studs.

Remove the wire shelving. Hold a clip at each mark, according to manufacturer instructions, and mark the pin-hole location. Note: There is an offset from the level line on the wall that must be taken into account. 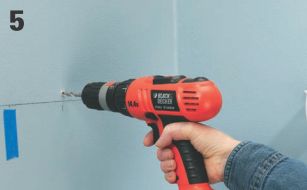 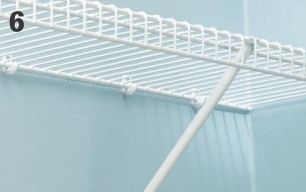 ATTACH SUPPORT BRACKETS
Where possible, align support brackets at stud locations. Mark screw holes on wall. Determine where the other brackets will go on the wall for a uniform appearance. Space brackets approximately every 16″ apart along the back wall.

Attach wall brackets at stud marks, drilling screws through the bracket holes and into the anchors. For brackets that are not fastened to studs, use toggle bolts.

Fasten the other end of the brackets to the wire shelving according to the manufacturer instructions.