How to Install Electrical Boxes

You are here:
Lighting, Electrical & Security 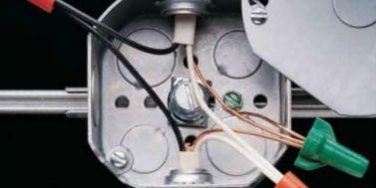 Electrical boxes come in several shapes. Rectangular and square boxes are used for switches and receptacles. Rectangular (2×3″) boxes are used for single switches or duplex receptacles. Square (4×4″) boxes arc used any time it is convenient for two switches or receptacles to be wired, or “ganged,” in one box, an arrangement common in kitchens or entry hallways. Octagonal electrical boxes contain wire connections for ceiling fixtures .

All electrical boxes are available in different depths. A box must be deep enough so a switch or receptacle can be removed or installed easily without crimping and damaging the circuit wires. Replace an undersized box with a larger box using the Electrical Box Chart as a guide.

How to Install Electrical Boxes for Receptacles 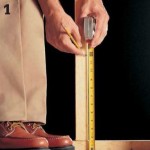 2. Position each box against a stud so the front face will be flush with the finished wall. For example, if you will be installing 1/2″ wallboard, position the box so it extends 1/2″ past the face of the stud. Anchor the box by driving the mounting nails into the stud. 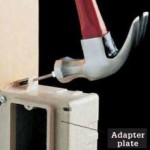 3. If installing square boxes, attach the adapter plates before positioning the boxes. Use adapter plates that match the thickness of the finished wall. Anchor the box by driving the mounting nails into the stud. 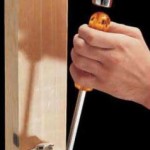 4. Open one knockout for each cable that will enter the box using a hammer and screwdriver. 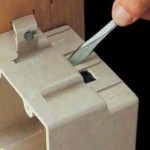 5. Break off any sharp edges that might damage vinyl cable sheathing by rotating a screwdriver in the knockout.

How to Install Electrical Boxes for Light Fixtures

1. Position the light fixture box for a vanity light above the frame opening for a mirror or medicine cabinet. Place the box for a ceiling light fixture in the center of the room. Position each box against a framing member so the front face will be flush with the finished wall or ceiling, then anchor the box by driving the mounting nails into the framing.

2. To position a light fixture between joists, attach an electrical box to an adjustable brace bar. Nail the ends of the brace bar to joists so the face of the box will be flush with the finished ceiling surface. Slide the box along the brace bar to the desired position, then tighten the mounting screws. Use internal cable clamps when uSing a box with a brace bar. Note: For ceiling fans and heavy fixtures, use a metal box and a heavy-duty brace bar rated for heavy loads.

How to Install Electrical Boxes for Switches

1. Install switch boxes at accessible locations, usually on the latch side of a door, with the center of the box 48″ from the floor. The box for a thermostat is mounted at 48 to 60″. Position each box against the side of a stud so the front face will be flush with the finished wall, and drive the mounting nails into the stud.

How to Install a Floor-warming System
December 30, 2012