How to Install a Bathroom Vent Fan

Most vent fans are installed in the center of the bathroom ceiling or over the toilet area. A fan installed over the tub or shower area must be GFCI protected and rated for use in wet areas. You can usually wire a fan that just has a light ﬁxture into a main bathroom electrical circuit, but units with built-in heat lamps or blowers require separate circuits.

If the fan you choose doesn’t come with a mounting kit, purchase one separately. A mounting kit should include a vent hose (duct), a vent tailpiece, and an exterior vent cover.

The most common venting options are attic venting and sofﬁt venting. Attic venting routes fan ductwork into the attic and out through the roof. Always insulate ducting in this application to keep condensation from forming and running down into the motor. And carefully install ﬂ ashing around the outside vent cover to prevent roof leaks.

Sofﬁt venting involves routing the duct to a sofﬁt (roof overhang) instead of through the roof. Check with the vent manufacturer for instructions for sofﬁt venting.

To prevent moisture damage, always terminate the vent outside your home—never into your attic or basement.

You can install a vent fan while the framing is exposed or as a retroﬁt, as shown in this project. Step 1: Position the vent fan unit against a ceiling joist. Outline the vent fan onto the ceiling surface. Remove the unit, then drill pilot holes at the corners of the outline and cut out the area with a jigsaw or drywall saw. 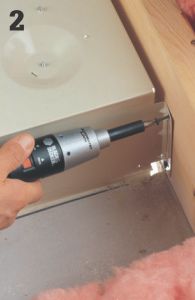 Step 2: Remove the grille from the fan unit, then position the unit against the joist with the edge recessed 1 ⁄ 4 ” from the ﬁnished surface of the ceiling (so the grille can be ﬂush mounted). Attach the unit to the joist using drywall screws.

Variation: For vent fans with heaters or light ﬁxtures, some manufacturers recommend using 2× lumber to build dams between the ceiling joists to keep the insulation at least 6″ away from the fan unit. 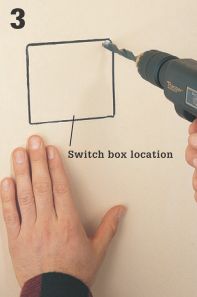 Step 3: Mark and cut an opening for a doublegang box on the wall next to the latch side of the bathroom door, then run a 14/3 NM cable from the switch cutout to the fan unit. Run a 14/2 NM cable from the power source to the cutout. Step 4: Strip 10″ of sheathing from the ends of the cables, then feed the cables into a double-gang retroﬁt switch box so at least 1 ⁄ 2 ” of sheathing extends into the box. Clamp the cables in place. Tighten the mounting screws until the box is secure. 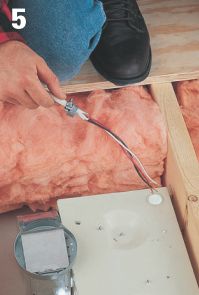 Step 5: Strip 10″ of sheathing from the end of the cable at the vent unit, then attach a cable clamp to the cable. Insert the cable into the fan unit. From the inside of the unit, screw a locknut onto the threaded end of the clamp. 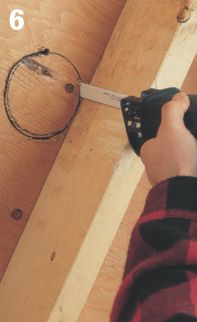 Step 6: Mark the exit location in the roof next to a rafter for the vent duct. Drill a pilot hole, then saw through the sheathing and rooﬁng material with a reciprocating saw to make the cutout for the vent tailpiece. 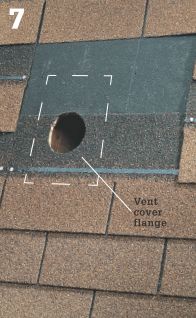 Step 7: Remove a section of shingles from around the cutout, leaving the rooﬁng paper intact. Remove enough shingles to create an exposed area that is at least the size of the vent cover ﬂange. 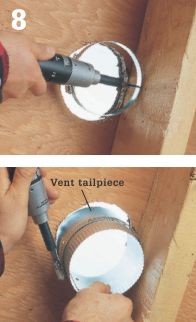 Step 8: Attach a hose clamp to the rafter next to the roof cutout about 1″ below the roof sheathing (top). Insert the vent tailpiece into the cutout and through the hose clamp, then tighten the clamp screw (bottom). 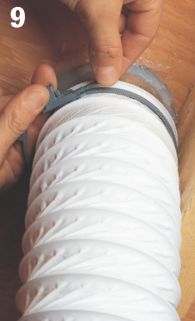 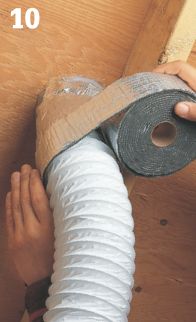 Step 10: Wrap the vent hose with pipe insulation. Insulation prevents moist air inside the hose from condensing and dripping down into the fan motor. 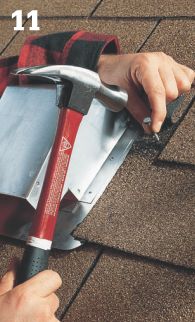 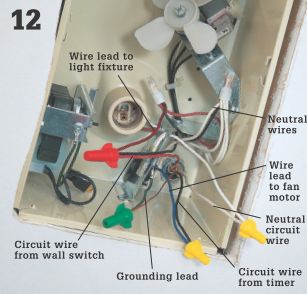 Step 12: Ensure power is off and test for power. Make the following wire connections at the fan unit: the black circuit wire from the timer to the wire lead for the fan motor; the red circuit wire from the single-pole switch (see step 14) to the wire lead for the light ﬁxture in the unit; the white neutral circuit wire to the neutral wire lead; the circuit grounding wire to the grounding lead on the fan unit. Make all connections with wire connectors. Attach the cover plate over the unit when the wiring is completed. 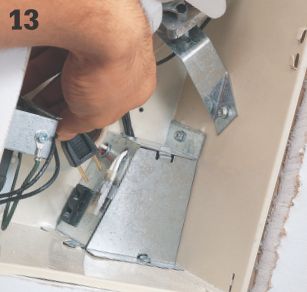 Step 13: Connect the fan motor plug to the built-in receptacle on the wire connection box, and attach the fan grille to the frame using the mounting clips included with the fan kit. Note: If you removed the wall and ceiling surfaces for the installation, install new surfaces before completing this step. 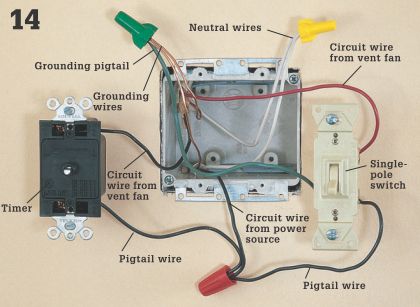 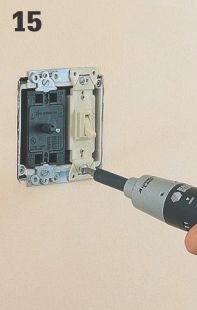 Step 15: Tuck the wires into the switch box, then attach the switch and timer to the box. Attach the cover plate and timer dial. Turn on the power.