An Amazing Screw that Practically Drives Itself into Materials

You are here:
Projects Tips & Techniques

Except for differences in size and head style, one screw is pretty much like another, right? That’s what I thought until I took a closer look.

exhibit. The company makes screws – lots of them. What’s really interesting though is how they design them. Now, admittedly, I never gave much thought to designing a screw, but, clearly GRK does. Their fasteners hold several patents that make them truly unique – from tip to head.

Threads That Cut Rather Than Push

The tip is self-drilling for fast starts. Just above that the is a special thread design that acts like a mini saw blade, actually cutting through any fibrous material and dramatically reducing the amount of torque required. The screw virtually pulls itself into the material with practically no pressure on the drill. This is true even when drilling directing into the center of a knot. Also, these screws significantly reduce splitting because the thread is designed to cut through fibers rather than pressing them aside.

A Screw Head with Teeth 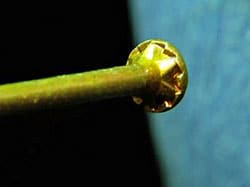 Even the screw head is uniquely designed. Cutting teeth on the underside cut a perfectly clean hole even in the most brittle materials and self-countersinking cutting pockets transport drill dust away from the edge of the screw hole.
The best way to understand what all these features really mean is to grab a drill and drive one in. You’ll see what I mean when I say the fastener practically drives itself.

How to Install Archways in Wall Openings
February 6, 2014